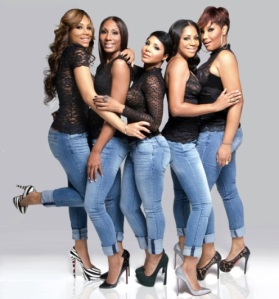 When the Braxton Family Values first season aired, I refused to watch it.  I did not have anything against the Braxton family, I think they are a beautiful and talented group of women but I had reached my limit the previous year with certain types of Reality TV shows thanks to Real Housewives of Atlanta.  I was no longer going to waste my time watching the primetime mess and drama that make black woman look bad.  So I quietly and consciously pulled my viewer number out of their ratings and picked up a good book.  I assumed the Braxton’s and their values were going to be on the same level of those other shows, so I was not interested in watching.

Then it happened, I was up late one night flipping through channels to try to entertain myself while doing my hair and Braxton Family Values was on.  The season was about to end so they were playing reruns of the previous episodes.  I paused just for a moment out of curiosity, with a pessimist attitude and with my lips curled in to a perfect smirk, expecting to shake my head in pity.

However, I was not prepared for Tamar’s antics and her diva.com thing.   I was soon running back and forth between my bathroom and television while flat-ironing every other section of my hair.  In the end, I did shake my head while watching the show alright, but not from side to side in disgust but up and down in laughter.  Toni, Traci, Trina, Tamar, Towanda and their mother Evelyn won me over, at least for now.

If you are wondering, I am not against reality television though it doesn’t seem REAL anymore.   However, I have a problem with the lack of programs that positively portray black women and the current trend of these reality shows that exploit the most ignorant of us all.  We are all not loud mouth, uncouth, grown adult women who pretend to be rich and who fight everywhere we go while wearing Gucci, Luchie and Prada.

What is different about Braxton Family Values and the reason I like the show is because it is about family and not focused on back-biting, back-stabbing and bull crap.  The Braxton family is just like any other family full of colorful personalities colliding and crashing in to each other which organically provides the drama without tearing each other down and they are being transparent about their issues, showing both the highs and the lows of their lives.

It is evident that they have a strong bond and love each other.  Their mother Evelyn is the glue that keeps them all together and their respect for her is concrete.  I really like Evelyn, she always keeps it real, and I dig that.

The one issue that I have with the show is I think they can use a little more tact when exposing all their issues, some things should stay in the family, reality TV or not.  For example, Towanda telling the world that her husband is a bum, but oh yeah, he is a good father.  I know that she signed contracts and agreed to show the world the good and the imperfect parts of her life but she has young children who will watch reruns of this show one day when they are old enough to comprehend and they may ask her, “Mom, why did you say those things about our father?”  What is she going to say?   Or what if one of their children’s friends says something cruel to them at school like, “My dad said your dad is a loser, living off your mom”.  Not cool.  Towanda’s husband better catch a clue and stay off camera and tell her to close her mouth.

Overall, I’m interested in seeing how this season is different from last year, wondering if the success has spawned any big heads and bigger divas.  I hear that the lure of fifteen minutes of fame is a change agent and usually not for the better, so we will see.

Braxton Family Values comes on Thursday nights on WE TV.